Gialdroni & Condello on Law and Architecture (between History and Philosophy) 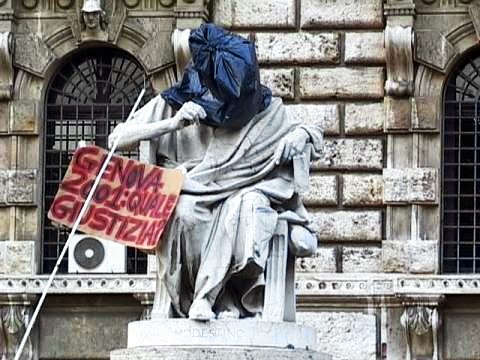 Dear All,
this week classes will be devoted to the meaning and function of the Italian Court of Cassation's building, better known in Rome as "Il Palazzaccio".
We will start with a philosophical introduction on semiotics with a focus on symbols (in particular using Peirce and Cassirer). On Thursday we'll apply the theoretical framework to the historical context of Italian unification, with regard to the construction of the Supreme Court.
Finally, on Friday we will "learn by experience" - by visiting the Supreme Court as well as Piazza Cavour.
Don't forget the bring your cameras and IDs (carta d'identità)!
Readings:
T. Rossi Kirk, The Politicization of the Landscape of Roma Capitale and the symbolic role of the Palazzo di Giustizia, in Mélanges de l'Ecole Française de Rome: Italie et Mediterranée, 109.1 (2006), pp. 89-114
If you want to have a general overview on C. S. Peirce and E. Cassirer please read

Dr. Stefania Gialdroni is a legal historian with a passion for interdisciplinary studies.
She graduated in Law from the RomaTre University in 2003 and in 2005, after having finished her legal apprenticeship, she started the International Max-Planck Research School for Comparative Legal History in Frankfurt am Main. In 2006 she was admitted as a Marie Curie fellow to the PhD in European Legal Cultures. In the framework of this Doctorate, she spent one year at the LSE in London and two years at the EHESS in Paris as a visiting Ph.D. student.
As a research fellow at RomaTre University, she has been coordinating the Law and the Humanities course since 2008 and since 2011 she has been the instructor of the Human Rights in Historical Perspective Course at Arcadia University. She has published articles and a book on legal history and on law and literature.

Since January 2014, together with Prof. Dr. Emanuele Conte and Dr. Stefania Gialdroni, she collaborates on the pluri-disciplinary course, Law and the Humanities at the Department of Law at Roma Tre. Since 2008 Angela has been teaching philosophy of law and legal theory at the International University Uninettuno. As of 2013, Angela works with the Human Rights Committee of the ItalianSenate of the Republic, as an assistant to the President of the Commission, Prof. Luigi Manconi.

In terms of research, Angela has collaborated with: Max Planck Institute for Comparative Public and International Law (Heidelberg), the École des Hautes Études en Sciences Sociales (Paris), the Department of Philosophy and the School of Law at the University of California at Berkeley, the Australian National University in Canberra. Recently, she completed a scholarship program at the Max Planck Institute for Comparative Public and International Law (Heidelberg). As of January 2014, Angela is a member associé of the Centre d'étude des normes juridiques at the EHESS in Paris, directed by Prof. Dr. Paolo Napoli. She is also currently involved in an international research project entitled ENTRE A JURISDIÇÃO E A MEDIAÇÃO: O PAPEL POLÍTICO/SOCIOLÓGICO DO TERCEIRO NO TRATAMENTO DOS CONFLITOS, based in Brazil. Additoinally, Angela Condello is a Fellow at the Käte Hamburger Centre for Advanced Study “Law as Culture”.
Posted by Dr. Angela Condello at 8:33 PM