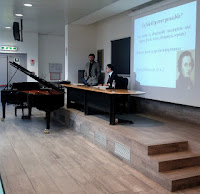 Dear all,
on Thursday and Friday (as usual at 10:00 am, room 4), Prof. Giorgio Resta (University of Bari) and M° Enrico Maria Polimanti (professional pianist) will introduce us to the very special topic of Law and Music, with particular focus on the similarities between legal and musical interpretation.

THIS VERY SPECIAL EVENT IS OPEN TO ALL PEOPLE INTERESTED: PLEASE PROMOTE IT AND INVITE WHO YOU WANT!

Reading
The reading is avalable online and, guess what, the author is prof. Manderson!
D. Manderson, Fission and Fusion: From Improvisation to Formalism in Law and Music, in "Critical Studies in Improvisation", 6.1 (2010).

Enrico Maria Polimanti was born in Rome in 1969. He studied at the Conservatorio di Santa Cecilia and at the Royal College of Music in London, and has performed as soloist and in chamber ensembles for many concert seasons and music festivals, playing a wide range of traditional repertoire but also works by lesser-known composers such Lodovico Giustini and Hyacinthe Jadin. He has played programmes dedicated entirely to Mozart, Haydn, Beethoven, Schubert, Schumann and Debussy. Several composers have also written works for him, one of whom is Francesco Giammusso, whose Piano Concerto he performed in Paris with the Orchestre Internationale de la Cité
Universitaire.
Mr Polimanti’s recordings for the labels Tactus and Naxos gained recognition by the critics in Italy and abroad (5 stars The Listerner and Musica) and his performances have been broadcast in Italy (Radio 3, V Canale della Filodiffusione, Radio Vaticana, RAI 3), France, Romania and Austria. Engaged in the diffusion of musical culture, he regularly gives lectures and lecture- concerts in various schools, associations and universities both in Italy and abroad. Enrico Maria Polimanti has translated into Italian Charles Rosen’s Beethoven’s Piano Sonatas and Jean-Jacques Eigeldinger’s Chopin vu par ses élèves. His essay The Earth has many keys, which analyzes the works of five Italian contemporary composers based on the poetry of Emily Dickinson has been selected for the American Literay Scholarship (Duke University Press).


Giorgio Resta's CV:Giorgio Resta is Associate Professor of Comparative Law at the University of Bari, Italy (since 2002) and former Visiting Professor at the Faculty of Law, McGill University (2010-2011). He is the author of three books and several essays on personality rights, contracts, torts and intellectual property in comparative perspective. His first book “Autonomia privata e diritti della personalità” has been selected as one of the 10 best legal books of the year 2005 by the “Istituto Sturzo – Club dei giuristi”; the second, co-authored with Guido Alpa, is part of the prestigious Treatise of Italian Civil Law, directed by Rodolfo Sacco. His last book, in English, was published in 2009 with the title “Trial by Media as a Legal Problem: A Comparative Analysis”.
He edited two books (the last one concerns the New intellectual property rights and the Numerus Clausus Principle) and the Italian translation of Hesselink’s “New European Legal Culture”; he also co-edited with Guido Alpa a casebook on Contracts Interpretation. In 2008 he served as a member of the scientific board of the Legislative Committee for the reform of third book of Italian Civil Code, appointed by the Italian Ministry of Justice; currently he serves as legal counsellor at the Ministry of Justice. He is member of the Italian Association of Comparative Law, the Italian Association of Law & Literature and co-director of the law series “Interferenze” (published by Editoriale Scientifica). He has been granted scholarships from the International Council for Canadian Studies, the Max-Planck-Institut für Internationales und Ausländisches Privatrecht (Hamburg, Germany), the Max-Planck-Institut für Geistiges Eigentum (Munich, Germany), the European Commission and the Italian Research Council. He has been invited to lecture and deliver conferences in foreign Universities, such as the École des hautes études en sciences sociales (Paris), the Duke Law School (USA), the University of Bremen, and the University of Toronto. He studied, as a visiting scholar, in several Universities, such as the Yale Law School, the Duke Law School, the Ludwig-Maximilians Universität (Munich, Germany), and the University of Cologne. In 1995 he graduated with magna cum laude from the University of Rome “La Sapienza”. In 1999 he received his PhD in Private Law from the University of Pisa. He is member of the Italian Bar.
Posted by Dr. Stefania Gialdroni at 4:37 PM