next week the classes will be held by prof. Conte on Wednesday and by me (Stefania Gialdroni) on Thursday and Friday. The first class will be devoted to the (strict) relationship between Law and History while the other two classes will be dedicated to the analysis of Shakespeare's "Merchant of Venice", a very classical topic of the Law in Literature strand. The readings will be provided as soon as possible as we are still writing the definitive version of the mailing list. In the meanwhile, you can find the following article on J-Stor, available online if you are using the RomaTre wifi (http://host.uniroma3.it/biblioteche/page.php?page=banche_da30).
D.J Kornstein, Fie Upon Your Law! in "Cardozo Studies in Law and Literature", 5.1 (1993): A Symposium Issue on "The Merchant of Venice", 35-56.

Prof. Conte's CV
Professor of Legal History a the Università degli Studi di RomaTre and Directuer d'études at the EHESS in Paris.
He graduated cum laude in 1983 at the University La Sapienza in Rome, and received his Ph.D in Medieval Legal History from the University of Milan. He has done rsearch at the Max-Planck Institut fuer Europaeische Rechtsgeschichte in Frankfurt am Main and the University of California at Berkley.
He has held visiting professorships at the Universitat Autonoma de Barcelona (Spain), the EHESS in Paris, the University of Toulouse I (France), the University of Paris X Nanterre and the Ecole Normale Superieure Lettres et Sciences Humaines, Lyon (France). He has been visiting fellow at Berkley University (USA) and Cambridge University - UK (Peterhouse).
He serves as a member of the board of direction of many academic journals and series in Italy, France, Spain and the UK.
He has given many papers and lectures in Italy, Germany, France, UK, USA, Switzerland, Finland, Denmark, Argentina and Spain. His books and other publications focus mainly on medieval and modern legal history, on philology of legal texts and on the relationship between history and law in the 19th and 20th century. See also: http://lodel.ehess.fr/necj/docannexe.php?id=324 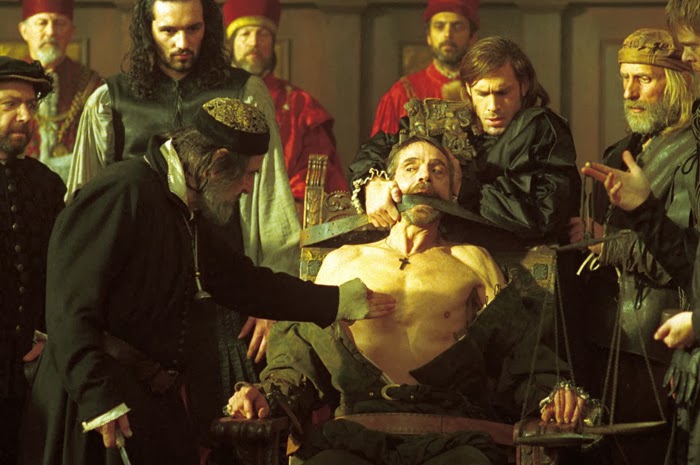 Brief Outline:The lessons will focus on the following questions:1) What was the role of Jewes in 16th-17th century Europe? What does it mean to be part of a minority?2) What is usury? How was it regulated?3) What was the relationship between law and equity in Shakespeare's England? What does equity mean? Suggested readings:
D.J Kornstein, Fie Upon Your Law! in "Cardozo Studies in Law and Literature", 5.1 (1993): A Symposium Issue on "The Merchant of Venice", 35-56.[Not compulsory!]: S. Gialdroni, La clausola penale tra finzione e realtà. Il caso limite di Shylock alla prova del diritto veneziano, del diritto comune e del common law, in "La pena convenzionale nella prospettiva storico comparatistica", Napoli: Jovene, 2013, 19-49. Dr. Gialdronis' CV:Stefania Gialdroni is a temporary instructor in Legal History at the University of RomaTre, Law Department. She received her PhD in 2009 from the University of Milano-Bicocca and the EHESS in Paris ("co-tutelle"). In 2006 she entered the Marie Curie Program "Doctorate in European Legal Cultures". In the framework of this PhD, she spent one year at the London School of Economics and two years at the EHESS in Paris. She was awarded several scholarships from the MPIER in Frankfurt am Main where she also attended the International Max-Planck Research School for Comparative Legal History for one year. She has been teaching the course "Human Rights in Historical Perspective" at Arcadia University - Rome Center since 2011 and worked as a tutor in Legal Histor at the online University UniNettuno (2011-2012).She published articles, essays and a book (East India Company. Una storia giuridica (1600-1708), Bologna: Il Mulino, 2011) on the history of commercial law and on Law and Literature. She has been assisting prof. Conte in the organization of the "Law and the Humanities" course at the RomaTre University since it was first created in 2008.
Posted by Dr. Stefania Gialdroni at 4:40 PM