STEFANIA GIALDRONI on Law and Architecture 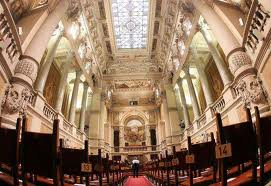 Dear students,
next week's classes will be devoted to the meaning and function of the Italian Court of Cassation's building, better known to the people of Rome as "il Palazzaccio". On Thursday March 21st we will visit the Supreme Course together while on Friday we will discuss your impressions and analyze the use of the building in cinema.

Temple of Justice or "Palazzaccio"? Giuseppe Zanardelli's Idea of Justice in Unified Italy

Reading:
Terry Rossi Kirk, The Politicization of the Landscape of Roma Capitale and the Symbolic Role of the Palazzo di Giustizia, in "Mélanges de l'Ecole française de Rome: Italie et Méditerranée", 109.1 (2006), pp. 89-114.
Dr. Gialdroni's CV
Stefania Gialdroni graduated cum laude in 2003 from the University of RomaTre (Law faculty), where she immediately started a collaboration with Prof. Conte, the chair of Medieval and Modern Legal History. In 2004 she did an Internship at the Italian Senate and in October 2005, and after having finished her legal apprenticeship in Rome, she started the International Max-Planck Research School for Comparative Legal History (Germany). By 2005 she had obtained two scholarships from the Max-Planck Institut für europäische Rechtsgeschichte, Frankfurt am Main (MPIER). In 2006 she started the Marie-Curie European Doctorate in History, Sociology, Anthropology and Philosophy of Legal Cultures in Europe. In the framework of the European Doctorate she spent one year (2006-2007) as a visiting Ph.D. student at the London School of Economics (LSE) and one year as a visiting Ph.D. student at the Ecole des Hautes Etudes en Sciences Sociales, Paris (EHESS).
On February 11th 2009 she received her Ph.D. en cotutelle between the Universities Milano-Bicocca (Private Law and History of Private Law Legal Science) and EHESS, Paris (History and Civilisations). Since 2008, she has been coordinating the course Law and the Humanities (RomaTre University), directed by prof. E. Conte. In 2011 she published her first book, based on her PhD thesis: East India Company. Una storia giuridica (1600-1708), Bologna: Il Mulino.
Posted by Dr. Stefania Gialdroni at 3:19 PM