Law and Architecture is developing!

Look at these very recent publications!
Linda Mulchay, Legal Architecture. Justice, Due Process and the Place of Law, Abingdon, 2011. 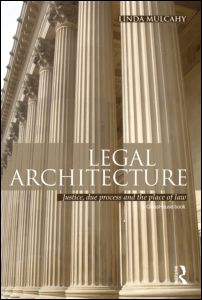 Legal Architecture addresses how the environment of the trial can be seen as a physical expression of our relationship with ideals of justice. It provides an alternative account of the trial, which charts the troubled history of notions of due process and participation. In contrast to visions of judicial space as neutral, Linda Mulcahy argues that understanding the factors that determine the internal design of the courthouse and courtroom are crucial to a broader and more nuanced understanding of the trial. Partitioning of the courtroom into zones and the restriction of movement within it are the result of turf wars about who can legitimately participate in the legal arena and call the judiciary to account. The gradual containment of the public, the increasing amount of space allocated to advocates, and the creation of dedicated space for journalists and the jury, all have complex histories that deserve attention. But these issues are not only of historical significance. Across jurisdictions, questions are now being asked about the internal configurations of the courthouse and courtroom, and whether standard designs meet the needs of modern participatory democracies: including questions about the presence and design of the modern dock; the ways in which new technologies threaten to change the dynamics of the trial and lead to the dematerialization of our primary site of adversarial practice; and the extent to which courthouses are designed in ways which realise their professed status as public spaces. This fascinating and original reflection on legal architecture will be of interest to socio-legal or critical scholars working in the field of legal geography, legal history, criminology, legal systems, legal method, evidence, human rights and architecture. 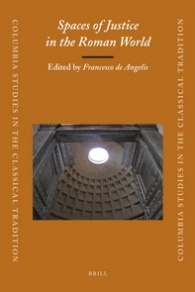 Despite the crucial role played by both law and architecture in Roman culture, the Romans never developed a type of building that was specifically and exclusively reserved for the administration of justice: courthouses did not exist in Roman antiquity. The present volume addresses this paradox by investigating the spatial settings of Roman judicial practices from a variety of perspectives. Scholars of law, topography, architecture, political history, and literature concur in putting Roman judicature back into its concrete physical context, exploring how the exercise of law interacted with the environment in which it took place, and how the spaces that arose from this interaction were perceived by the ancients themselves. The result is a fresh view on a key aspect of Roman culture.
Posted by Dr. Stefania Gialdroni at 12:32 PM